Posted by Site admin December 19, 2017
Astronomers' recent observations of our first-known interstellar visitor reveal that it is very strange indeed. 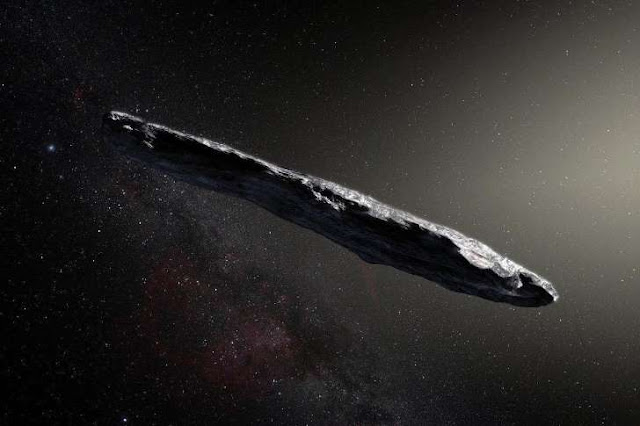 Back in late October, in the days following the discovery of what proved to be an object from interstellar space, astronomers scrapped the observing plans at observatories worldwide to scrutinize this unique visitor before it zipped out of the inner solar system, never to return. Right now ‘Oumuamua (or 1I/2017 U1), as it's now known, is some 350 million km (2.3 astronomical units) from Earth, has dimmed to only 27th magnitude, and is receding at another 5½ million km (15 Earth-Moon distances) each day.

Read: Is ‘Oumuamua an alien spacecraft?

But the flurry of observations made weeks ago, when it was closer and brighter, have fueled a second flurry of activity — writing scientific papers — to detail what we've learned. Here are three highlights that have come to light since the previous update.

It's Reddish
Some of the first observations of 1I/2017 U1 showed that it had a slightly reddish color, not unlike a class of red-tinged bodies (called D types) found in the outer asteroid belt. Careful spectral measurements made by Alan Fitzsimmons (Queens University Belfast) and others using the 4.2-m William Herschel Telescope and the 8.2-m Very Large Telescope bear out this initial assessment.

Writing in Nature Astronomy, the observers note that they don't see any spectral evidence for outcrops of rocky minerals. This suggest that all of `Oumuamua might be covered with a veneer of icy organic compounds that have turned red after prolonged exposure to space radiation. This conversion doesn't take very long on cosmic time-scales — roughly 10 million years — and for all we know this body had been drifting through interstellar space for billions of years before showing up on the Sun's doorstep.

In fact, the Fitzsimmons team contends, the dark, reddish exterior of ‘Oumuamua might be masking an icy interior deeper down. The researchers calculate that the surface temperature soared to roughly 600 Kelvin during its brief but close encounter with the Sun (just 0.25 astronomical unit, well inside Mercury's orbit). But they also find that a topside layer of irradiated, carbon-rich goo would only need to be a half meter thick to keep the Sun's heat from reaching deeply buried water ice and even frozen carbon dioxide. They'd remain as ices, instead of sublimating and escaping in comet-like fashion.

"We recognize one obvious problem with this model," the authors admit. Comets in our own Oort Cloud should likewise have built up thick mantles due to 4½ billion years of exposure to cosmic rays, yet most are clearly give off lots of gas as they near the Sun. One possible out: Maybe ‘Oumuamua spent enough time near its host star that become completely devolatilized before heading our way.

It's Tumbling
It didn't take observers long to realize that ‘Oumuamua displayed wild swings in brightness of up to 2½ magnitudes — a factor of 10! — that defied easy explanation. Surely it must be highly elongated, with a length 5 to 10 times its width (depending on whom you ask). Some of the initial reports suggesting a spin period of 7.5 hours proved premature.

A team led by Michal Drahus (Jagiellonian University, Poland) used the Gemini North telescope to bag hundreds of images on October 27th and 28th. "While the light curve of 1I/‘Oumuamua is clearly periodic, it does not repeat exactly from one rotation cycle to another," they write in an online preprint. "Furthermore, the light curve does not appear to have a single, unique periodicity because the rotation periods reported by other studies differ from one another and are inconsistent with our data."

The object could only be spinning this erratically if it were tumbling, a characteristic that's rare among our solar system's asteroids and comets. (Comet 1P/Halley is a tumbler, for example, driven by assorted of gas jets from its nucleus.) But ‘Oumuamua shows no hint of outgassing, and the chance that it struck something in our solar system en route to its discovery seems impossibly remote. Most likely, they conclude, it had a rough time while escaping from the system of its origin.

It's Not Broadcasting!
One of the most unexpected studies occurred earlier this month when Breakthrough Listen — the initiative to find signs of intelligent life in the universe — funded an effort to eavesdrop on any radio transmissions that ‘Oumuamua might be broadcasting. On December 13th astronomers used the huge Robert C. Byrd Green Bank Telescope in West Virginia to listen to billions of radio frequences in four bands spanning 1 to 12 gigahertz.

The Green Bank search didn't turn up any radio "beacons" or other transmissions in narrow frequency bands, though the analysis of three of the bands isn't complete. Honestly, the Breakthrough Listen team didn't expect to pick up alien broadcasts from this interloper — but, hey, why not try, right?

One final set of observations of 1I/2017 U1 is under way. Karen Meech and others are attempting to record images with the Hubble Space Telescope. Their aim is simply to locate its position against background stars as accurately as possible. Those measurements, in turn, will fine-tune calculations of the object's in-bound trajectory and help us identify where this strange object came from and perhaps shed some light on how it got here.
strange and bizzare world