Posted by Site admin December 05, 2017
Since the news broke that Governor Rochas Okorocha of Imo State appointed his sister, Mrs. Ogechi Ogolo (nee Okorocha) as the state’s Commissioner for Happiness and Couples’ Fulfillment, Nigerians have been dumbfounded at the series of dumb actions the governor has been engageing himself with. 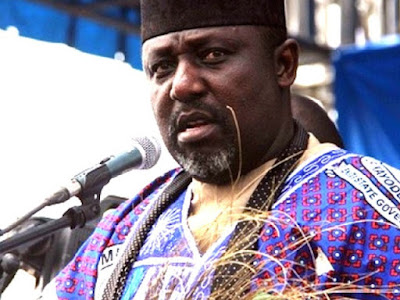 In their frustration, Nigerians in their millions have taken to social media to attack the governor for his latest gaffe, and vent their bewilderment.

Recall some weeks back, Okorocha unveiled statues for Presidents Jacob Zuma and of Ellen Johnson-Sirleaf of South Africa and Sierra Leone respectively.

His latest action has incurred the wrath of Nigerians who are left with no choice but to question the kind of leaders the country has running her affairs.

Below are some of the reactions;

Rochas Okorocha appointed his Sister Ogechi as Commissioner for Happiness and Couples’ Fulfillment!
I have never heard of such commissioner in my life. Have you?
This democracy is a FRAUD! pic.twitter.com/zLkAID3So1
— Kemi Ariyo (@d_problemsolver) December 5, 2017

Governor Rochas Okorocha of Imo State appoints his biological sister; Ogechi as Commissioner for Happiness and Couples Fulfillment….Imo people, how is your body? pic.twitter.com/cmLTMzOoCI
— Made In Ibadan (@UrbanCulture06) December 5, 2017

Rochas Okorocha appointed his Sister Ogechi Ololo (nee Okorocha) as Commissioner for Happiness and Couples’ Fulfillment? Forget about the nepotism, that is now a regular in both Federal and State governments, but what is commissioner for happiness? Imo una Governor no well at all pic.twitter.com/p0dHmp9Kt7
— Kayode Ogundamisi (@ogundamisi) December 5, 2017

Nothing will derail us from this trending topic, #EndSARS

Not even Fuel scarcity.

Not even Rochas Okorocha.

Not even Christmas (If our wish is not done by then)

Yes we mean business!
I implore that we all truthfully continue sharing our experiences or those of our friends.
— Ayo FBI (@PureMind__) December 5, 2017

So Governor Rochas Okorocha of Imo State just had his biological sister sworn in to government as commissioner for Happiness and Couple’s Fulfillment.
He whom the gods want to destroy they first make mad.
— fяαикℓιи σкєяє (@okere_franklin) December 5, 2017

Rochas Okorocha has appointed a Commissioner for Happiness & Couples’ fulfillment.
No. This is not a joke.
— Igala_Alan_Shore (@i_am_Anomeli) December 5, 2017

When you think fayose is the biggest idiot in your country then you meet Rochas Okorocha pic.twitter.com/M85I1bNVqF
— Village_HEAD_master (@Topson007) December 5, 2017

When Runtown said “If you follow me go Na enjoyment go kill am o” Rochas Okorocha felt it really deep and decided to open office of commissioner for happiness.
It really be ya own governor.. Smh.
— Mr. Jack Robinson (@jackdre02) December 5, 2017

At this point in time, I must conclude. Rochas Okorocha is mad. It is tested and confirmed.
WHAT IN THE WORLD IS “COMMISSIONER FOR HAPPINESS AND COUPLES’ FULFILMENT”? 🤔🤦🏾
— BlazeVisual.com (@uncle_BLAZE) December 5, 2017