Posted by Site admin December 20, 2017
Nigerians have been thrown into panic following the re-emergence of long queues at fuel stations in parts of the country. 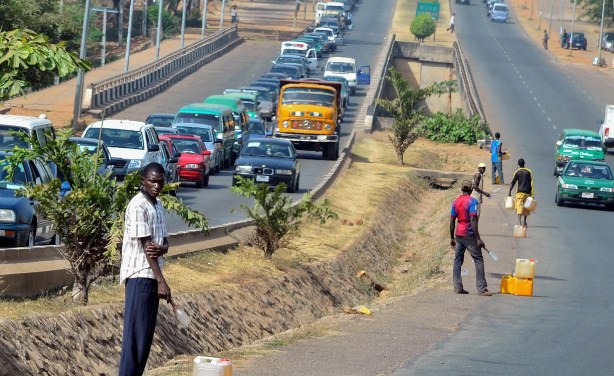 The fuel supply situation in the country took a turn for the worse on Tuesday as queues of desperate motorists grew longer at many petrol stations selling Premium Motor Spirit, also known as petrol, in Lagos, Ogun, Kwara and other states of the federation, including the Federal Capital Territory.

Our correspondents gathered that many of the private depots in Apapa, Lagos, where many marketers get petroleum products from for distribution to other states, did not have PMS while those who had were doing “skeletal loading.”

Fuel queues, which started emerging in some parts of the country on Monday after more than a year of relief from scarcity of petroleum products in the country, were seen spilling onto some roads in Lagos and Ogun states on Tuesday and caused gridlock.

The PUNCH gathered that many depots in Apapa did not have petroleum products on Tuesday, while the few with products recorded low activities.
The ex-depot prices charged by the depots for PMS ranged from N139 to N143 per litre, compared to the official ex-depot price of N133.28.

Motorists and other consumers of petrol complained about the latest round of fuel scarcity, alleging that it might be a ploy to increase the pump price of the product.

They also wondered why the latest crisis was happening at a time Nigerians were preparing for the Christmas and New Year festivities.

Some were seen fighting to get to the pumps, while fuel attendants and ‘area boys’ made brisk business from desperate motorists who wanted to jump the queues so as to be serve quickly. At a filling station in Ogba, the attendants who manned the gates collected N1,000 from each motorist before allowing them inside.

The association alleged that the NNPC was also frustrating its members by reneging on the bulk purchase agreement it signed with them to supply the product at N133.28 per litre.

The Executive Secretary, Depot and Petroleum Products Marketers Association, Mr. Olufemi Adewole, said the increase in price of crude oil had led a corresponding rise in the prices of refined products.

He said, “It is only the NNPC that is bringing products in; we also noticed a supply gap in what they brought in. It wasn’t enough at a particular time and the result is what we are seeing today.

“But they have also equally assured us that they have enough stock and that they are expecting vessels to come in; our members have paid for PFI (pro-forma invoices) for PMS. So, once the NNPC cargoes come in, we will receive the product and sell to Nigerians.”

Asked why marketers were not importing, Adewole said, “Landing cost of PMS today has increased. By the time we land the product based on the international crude oil prices, petrol should be selling for about N165-N170 per litre. But the government is saying we should sell at N145. So, if there is no subsidy, we have to depend on the NNPC to give us the product.”

A top official at one of the depots in Lagos, who spoke on condition of anonymity, said the supply dislocations would take days to disappear.
He said, “We are still doing skeletal loading; no depot wants to be out of stock completely because it is not good for business. As of today (Tuesday), there is no vessel dispending PMS from the Apapa jetty, except the one in Oando SPM.

“Marketers are still being owed 2016 subsidy claims. No sane marketer can put his money down now to import petrol. Nobody is talking about when the subsidy arrears would be paid; so everybody has to rely on the NNPC. Also, the landing cost of petrol has increased.”

In Calabar, the capital of Cross River State, major petrol stations sold PMS to customers at the pump price of N145 per litre.

Few filling stations, however, sold the product at the N150 per litre.

It was observed that majority of the independent petroleum outlets had stopped selling as of 5pm on Tuesday. A source said the outlets preferred selling the product to black market operators at night.

In Ilorin, the Kwara State capital, the fuel scarcity has yet to be felt in the metropolis as all the filling stations visited by one of our correspondents sold petroleum products to buyers at the government regulated prices.

There was panic-buying of petrol in Ado Ekiti as motorists were seeing rushing to filling stations to stock up the product.

As of 4pm on Tuesday, the situation was normal at filling stations along Bank Road in Ado Ekiti, including a franchise station of the Nigerian National Petroleum Corporation.

Filling stations in Uyo operated normally as there were no queues within the metropolis. However, some stations dispensed petrol at N150 instead of N145 per litre.

The situation in Niger State was similar as motorists bought petrol at the rate of N145 per litre in almost all the filling stations in Minna except the NNPC mega stations that sold it for N143.

Officials of the Department of Petroleum Resources stormed some filling stations in Abeokuta, Ogun State capital on Tuesday to check hoarding of petrol.

The DPR officials led by the Operations Controller, Abeokuta Field Office, Muinat Bello-Zagi, inspected the facilities at the filling stations, especially the storage tanks, to measure the products stored there.

In Abuja and Nasarawa State, motorists waited in queues for many hours to buy petrol.

Along the Kubwa-Zuba Expressway in Abuja, many motorists formed queues in front of the NNPC mega station and the Nipco filling station located on the road, while many others were sighted at some stations around Madalla and Suleja in Niger State.

Queues were also observed in front of the few petrol stations that dispensed petrol along the Abuja-Keffi road in Nasarawa State.

Despite the development, the Nigerian National Petroleum Corporation described the situation as panic buying, insisting that it had enough product to keep the country wet.

The Group Managing Director, Maikanti Baru, stated that the situation was due to panic buying, adding that the corporation was doing everything within its reach to address the matter.

He was quoted in a statement issued on Tuesday by the corporation’s spokesperson, Ndu Ughamadu, as saying, “For the umpteenth time, I wish to call on all Nigerians to stop panic buying. We have said times without number that the NNPC has sufficient products to cater for the needs of all consumers.”

Filling stations in Akure, Ondo State capital, and some other towns had long queues of vehicles as the petrol scarcity that had hit the state since Monday worsened on Tuesday.

It was observed that some filling stations were shut down while those that opened had long queues of vehicles.

Worried by the development, the Senate on Tuesday summoned the NNPC GMD to appear before its Committee on Petroleum Resources (Downstream) on Thursday over the rising scarcity of PMS across the country.

Baru failed to appear before the committee on Tuesday, leading to the rescheduling of the meeting during which he would be expected to explain the reasons for the scarcity.

The Chairman of committee, Senator Kabiru Marafa, while briefing journalists in Abuja, said plans had also been concluded to commence nationwide inspection of filling stations over the looming fuel crisis.

Marafa stated the Senate would not allow some unpatriotic persons to cause Nigerians any hardships, especially during the Yuletide, stressing that though the lawmakers had adjourned plenary to conduct budget defence sessions for Ministries, Departments and Agencies of the government, members of the committee would embark on the oversight visits to the filling stations.

He said members of the committee would be regrouped into sub-committees to make it possible for them to visit all the states.