Zimbabwe's Vice President Emmerson Mnangagwa To Be Sworn In As President

Posted by Unknown November 22, 2017
Zimbabwe’s former vice-president is set to be sworn in as the second president of the country until the next general elections in 2018. 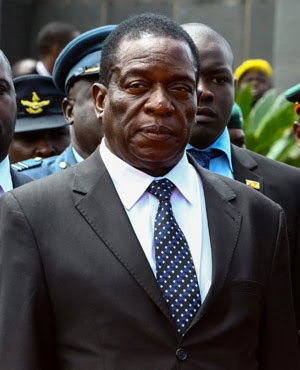 Mnangagwa will become Zimbabwe’s president when he is sworn in today in the capital of Harare.

While he was in South Africa when news broke of Robert Mugabe’s resignation in parliament today, Mnangagwa is headed to Zimbabwe to officially take up the helm of the presidency.

According to SABC, ZANU-PF legal secretary Patrick Chinamasa has confirmed this after the resignation. ZANU-PF chief whip Lovemore Matuke also says that Mnangagwa will serve the remainder of Mugabe’s term until the next general elections, which must be held by September 2018.

Mnangagwa was appointed Zanu-PF’s interim president on Sunday at a special committee meeting in which Mugabe was fired and his wife Grace was expelled for life.


Mugabe tendered in his resignation late this afternoon while parliament moved to impeach him as head of state. He had refused to resign on Monday and on Sunday when he addressed the nation during a televised segment.

Zimbabwe’s military effected a coup last week Wednesday which saw Mugabe detained under house arrest in his own home and his close allies arrested, assaulted and stripped of their positions within Zanu-PF.
africa politics