What We Will Do in Anambra to Stop Elections – IPOB

Posted by Site admin November 12, 2017
The Indigenous People of Biafra, IPOB has described as wild allegation the claims that it intends to disrupt the Anambra governorship election on Saturday. 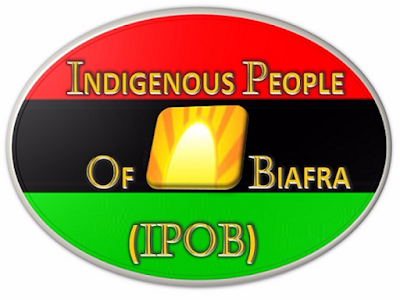 The group said it is not true that it plans to disrupt the election, saying that its only plan is to boycott the election because it will not be anything different from others that have been conducted in Nigeria.

It said, “Wild, unfounded and foolish accusations about IPOB intending to disrupt the polls on Saturday as peddled by politicians, is not only baseless but completely unfounded.”

The group said instead of watching out for disturbances from IPOB, Anambra people should better be careful of security agents who have been despatched to the state to kill and maim its citizens.

“What the good people of Anambra State should watch out for is the well known rigging antics of INEC. We insist on total boycott of all elections because voting in Anambra or any other elections in Nigeria is an exercise in futility because Aso Rock have already decided who they want sworn in as Anambra governor despite the warm words of free and fair elections emanating from APC praise singers in the South East.

“A country like Nigeria riddled with institutionalised injustice cannot conduct a free and fair elections. No free and fair elections has ever been conducted in Nigeria’s history, so Anambra State cannot be an exception. Risking ones life to go and vote on Saturday, with trigger happy Hausa Fulani soldiers looking for Biafrans to kill, is a risky adventure not worth undertaking by any sane person.”

IPOB spoke further, saying, “That they have perfected plans to rig the upcoming Anambra State Governorship election in favour of the most loyal Hausa Fulani slave among the contenders is not a secret.

“IPOB Intelligence Unit have uncovered plans by APC to import voters from Imo State with the help of Rochas Okorocha. Willie Obiano on the other hand is working hand in hand with Gov. Dave Umahi of Ebonyi State to bus in Northern youths resident in the state into Anambra to vote for Willie Obiano as a reward for signing up to the war against IPOB.

“At this moment, they have concluded plans to declare the APC candidate winner, whether people vote or not. What this means is that our vote doesn’t count. Voting is tantamount to legitimising illegitimacy,” IPOB said.

The group warned Anambra people that the same politicians who were urging them to go ahead and cast their votes were the same people that conspired with Aso Rock cabal to bring death to the southeast through Operation Python Dance II.

“We hereby warn all commercial vehicle operators to please stay away from Anambra State starting from the evening of the 17th of November because any vehicle seen will be regarded as hostile and working to subvert the will of the people.

“On no account must any vehicles pass through Anambra State because some politicians at the payroll of Fulani caliphate are hell bent on causing trouble on the 18th by importing alien voters into Anambra State.

“We are fully aware that all soldiers and police drafted into Anambra State have been brought ostensibly to facilitate the rigging of the election and to kill as many people as possible. So any vehicle seen on the road will be considered a threat to their plans to rig the election and the occupants of such vehicles will be shot dead.

“Therefore, we advise every body to stay in doors on that fateful day in Anambra State and to desist from driving through the state from 5pm on Friday the 17th of November to 6pm on Saturday the 18th,” the release read.
ipob news nigeria politics