Posted by Unknown November 01, 2017
An Egyptian lawyer, Nabih al-Wahsh's, has sparked outrage after he said that harassing and raping girls who wear revealing clothes such as ripped jeans is a “patrotic and national duty”. 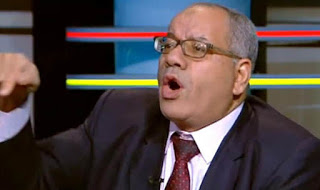 Mr al-Wahsh made the controversial statement during a debate over a draft law on prostitution on Al-Assema TV panel show broadcast early last month.

''Girls must respect themselves so others respect them. Protecting morals is more important than protecting borders

"Are you happy when you see a girl walking down the street with half of her behind showing?"

“I say that when a girl walks about like that, it is a patriotic duty to sexually harass her and a national duty to rape her.” al-Wahsh said

These comments have prompted fury across the country as Egypt’s National Council for Women announced it plans to file a complaint against the TV channel and issued a plea for media outlets to refrain from providing a platform for individuals who incite violence against women.
The National Council also said it would be filing a complaint against Mr al-Wahsh himself and rebuked his assertion. A spokesman said in a statement:

“All the members of the council denounce and decry this statement that explicitly promotes rape and sexual harassment.”

Mr al-Wahsh, a prominent conservative has previously stated his opposition to women serving as judges, arguing that if women become judges they could also become muftis - a Muslim legal expert who has the power to give rulings on religious issues.

His latest comments come after the Egyptian capital of Cairo was last month branded the “most dangerous” megacity for women in the first international poll which looked at how women fare in cities with over 10 million people.

A study conducted by the Egyptian Centre for Women’s Rights in 2008 found that 83 per cent of women said they’d been sexually harassed, while 62 per cent of men admitted to harassing women.

A further 43 per cent of men in Egypt believe that women like the attention and they appreciate being sexually harassed.