Texas Shooting: At Least 26 Killed At The Baptist Church

Posted by Unknown November 06, 2017
At least 26 people have been killed and many more injured after a man walked into a Baptist church in Sutherland Springs, Texas, on Sunday and opened fire on worshippers. 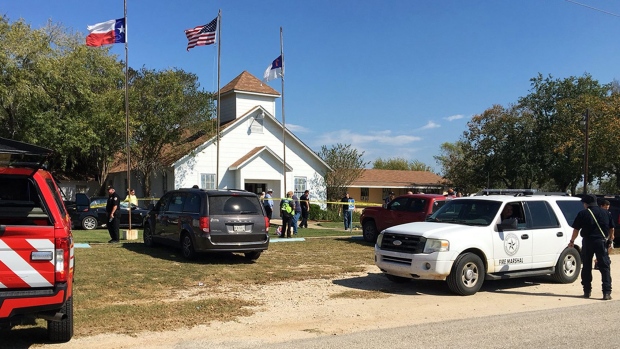 The number of dead at the First Baptist church in the small town 30 miles south-east of San Antonio made the killing the worst mass shooting in modern Texas history and one of the worst gun rampages in recent years. The lone shooter was found dead after he was chased by locals and police across county lines.

“There are so many families who have lost family members, and it occurred in a church, in a place of worship,” the Texas governor, Greg Abbott, in a Sunday evening press conference. “That’s where these people were mown down. We mourn their loss.”

Twenty-three worshippers died inside the church, two outside and one after being taken to hospital. Many more injured were still being treated. The ages of the dead ranged from five to 72.

Law enforcement officials at the press conference did not name the gunman, though his name was reported as Devin Patrick Kelley elsewhere. The Air Force said Kelley, 26, served from 2010 to 2014 when he left following a court martial. He received a bad conduct discharge for assaulting his wife and child. Kelley lived in the town of New Braunfels, about 35 miles from Sutherland Springs. On Sunday night, police were at the property.

Freeman Martin of the Texas department of public safety gave a brief timeline of events. At about 11.20am, he said, the suspect, described as a white male in his early 20s, was seen at a gas station over the road from the church.

He was dressed all in black in tactical-style clothes including a ballistic vest. He crossed the road and as he approached the church he began shooting, carrying on the firing as he entered the place of worship itself.

After the carnage, as he was leaving the church, he was engaged by a local resident carrying a rifle. The shooter dropped his own weapon, a Ruger assault rifle, and fled. He was pursued by police and just as he reached Guadalupe County his vehicle veered off the road. He was found in the car dead, it is not known whether by his own hand or having been shot by a local resident.

The scale of the shooting, and its location in a Baptist church in the south, presented Donald Trump with a renewed gun dilemma just as he embarked on a five-country tour in Asia.

Asked at a press conference in Tokyo what policies he would support to tackle mass shootings, the president focused on the mental health of the perpetrator and claimed that gun ownership was not a factor.

“We have a lot of mental health problems in our country, as do other countries, but this isn’t a guns situation,” Trump said. “Fortunately somebody else had a gun that was shooting in the opposite direction, otherwise it wouldn’t have been as bad as it was, it would have been much worse.

“This is a mental health problem at the highest level. It’s a very sad event … these are great people at a very, very sad event, but that’s the way I view it.”
news strange and bizzare world