Rochas Okorocha Set To Unveil Another Statue Of Liberian President

Posted by Unknown November 08, 2017
Strange and bizarre things have been happening in Imo state of Nigeria recently, and Imolites are helplessly perplexed as their governor, who is owing Imo state civil servants millions of naira in salaries, once again plans to unveil another huge statue of yet another African president despite the huge outcry against the last one he did. 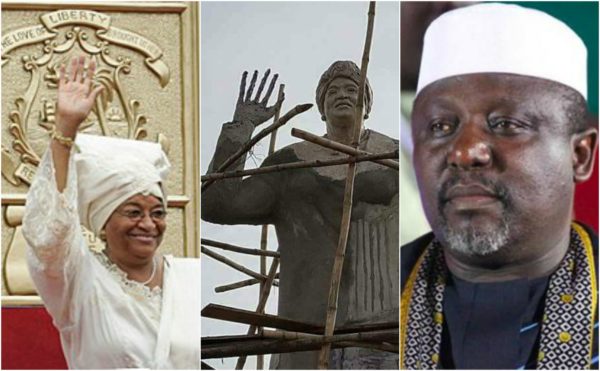 The recent huge outcry against the unveiling of a life-size statue of Jacob Zuma of South Africa was because it cost more than 550 million naira of taxpayers money while Imo state civil servants are being owed several months salaries. In addition, many had noted that Zuma is accused of corruption back in South Africa.

Despite the all-round condemnation of the former statue which many Imolites see as a useless venture, Governor Rochas Okorocha of Imo state, on Tuesday, announced that there will be yet another unveiling of a life-size statue of the Liberian President, Mrs. Ellen Johnson Sirleaf, on Thursday, during her upcoming visit. He further added that she will be conferred with a chieftaincy title and a road named after her in the state. A statue of the Liberian president (picture insert above) just like Jacob Zuma's will be unveiled during her visit.

According to the release:

“On arrival on Thursday, Mrs. Sirleaf would be taken to the Palace of Eze Imo to be accorded the African way of receiving an august visitor like her and the Chairman of the State Council of Traditional Rulers, HRM Eze Samuel Ohiri will be expected to decorate her with a Chieftaincy title taking into account that she took over the leadership of Liberia soon after a bloody Civil War and she has been able to sustain the peace of that Country for ten years now.

“The following day being Friday, November 10, 2017, Mrs. Sirleaf will then be at the Rochas Foundation College of Africa where she will meet with the Students and also specifically interact with the Liberian Students. And all these will help to instill confidence in the students and brandish a juicy future for them.

“After her outing to the College, the Liberian President will deliver a lecture to Imo women at Imo International Convention Centre ,IICC, and the topic will be women in politics. And the lecture is structured to encourage women in the State to develop interest in leadership, especially when it is recalled that Mrs. Sirleaf is the first female President in Africa.”