Posted by Unknown November 10, 2017
Nigeria’s Super Eagles captain and Tianjin TEDA midfielder, John Mikel Obi who spent nine years at Stamford Bridge, made 374 appearances for Chelsea, winning two Premier League titles, four FA Cups, One Champions League trophy and one Europa League trophy, has opened up on fight between Manchester United and Chelsea to get his signature shortly after FIFA Under-17 World Cup in Finland in 2003. 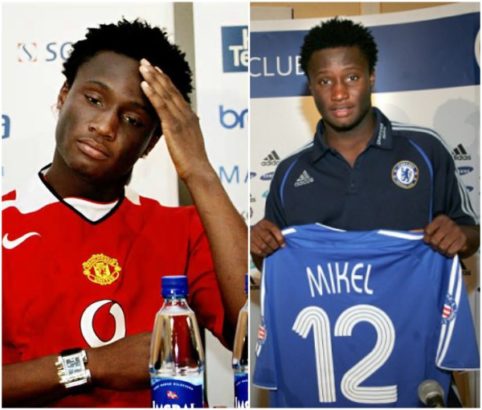 Mikel Obi, who earned a month trial at Old Trafford before United struck a provisional deal with Norwegian outfit Lyn Oslo to bring him to the Theatre of Dreams, revealed that United offered him a staggering £1.5m contract but Chelsea’s involvement became a hindrance for the deal to be sealed as he made a stunning u-turn to Stamford bridge in 2006.

“It was surreal,” admits Mikel. “I was at school, but had Chelsea and Manchester United — two of the world’s biggest clubs — trying to sign me. I’ll never forget that second meeting with Sir Alex. I’d signed a deal at United but had to tell him: ‘Sorry, I want to play for Chelsea’.
“He really liked me but I could see how angry and disappointed he was.
“Some things he told me made me think about changing my mind but I was thinking about Jose, too.
“I had these two great managers wanting me and I did not know what to do.
“Fergie told me: ‘Why would you turn down United? It’s the biggest club in the world. You cannot do that. You have to say Yes’.
“As a footballer, you have to make decisions that you live with for the rest of your life.”
“I trained with the first team,” he recalls. “Roy Keane was my bodyguard.
“Paul Scholes and Nicky Butt always tried to kick me but couldn’t when Roy was there because he’d have killed them.
“Sir Alex called me Obi Wan (after the Star Wars character).
“He called me into his office one day and said: ‘Obi Wan, do you know what Keane, Scholes and all the senior players have told me? They said you have to sign that boy’.
“I couldn’t believe it. Here was I, a schoolkid from Africa, training with some of the best in the world.”

He further revealed how football agents stormed his hotel room to get him to sign for their clubs;

“I had agents promising me everything,” he recalls. “One approached me in the hotel with a briefcase full of cash.I can’t remember what club he claimed to represent — but I do remember the briefcase. It was crammed with $70,000 (£53,000) and he offered me that to sign some contract before adding: ‘Sign here and you’ll get a lot more’.
“I was temp­t­ed. I’d never seen so much money but I told the Nigerian FA secretary who was looking after me.


“He told me to ignore this agent but promised I would join the best club. After the tournament I went home to my family and then saw the secretary again in Abuja.
“That’s when he told me: ‘You’re going to United. They want you and you’re leaving tomorrow’.
“My dad was so happy but mum was crying because I was moving abroad at such a young age.”
According to him, “Sir Alex really liked me,” says Mikel. “He made me feel really comfortable and encouraged me every day.
“He would call me into his office after training, point at the players’ plush cars in the car park and say: ‘If you work hard, next year you’ll be driving one of those. You are going to play for this club and you are going to be rich’.
“I didn’t know what to say. I was still at school so I didn’t even have an agent. I went home again and Sir Alex used to phone a hotel near our house when he wanted to speak to me.”
Mikel Obi further revealed in his interview with The Sun, that to return on his own but he waited for a call from then Manchester United coach, Alex Ferguson to confirm the trip but it never came. However his new agent, John Shittu, told him that Chelsea wanted to sign him. before he moved to Norway to train with Lyn Oslo who he signed a pro contract with.

According to him, after making a few appearances for Lyn Oslo, Fergie flew out for a meeting with him.

“The whole thing was so confusing,” says Mikel. “I thought I had something with Chelsea but United told me they had been looking for me and then Sir Alex visited me.
“He said: ‘We want you, we don’t want to lose you again’.
“Before I knew it, a contract had been sent to Lyn Oslo. United were offering me £1.5m for three years. I spoke to my dad, who told me I should just go for it.”
“Chelsea saw it on TV and went crazy,” he says. “I later discovered they had an agreement with Lyn Oslo not to sell me to any other club.
“Then John flew to Oslo to speak to me. My friends were calling me and then I thought, maybe I had been manipulated.
“All this was very hard for me. I was so young.
“We flew to London. I remember thinking: ‘I’ve signed for United but now I’m flying to Chelsea!”
Mikel Obi
According to Mikel, the shady deal caused a year-long legal battle between the two English club, which after he was summoned to a meeting with then Premier League chief Sir Dave Richards.

“He offered to help me,” recalls Mikel. “He told me it was making enemies between the two big clubs.
“I told him I wanted to play for Chelsea and he said he would help resolve it. Then I had a secret meeting with Mourinho at his house.
“Roman Abramovich organised six cars to get me there. It was like a military operation.
“I started in one car, then the drivers would talk to each other and suddenly I was dropped off and then picked up by another car.
“Once there, Jose told me: ‘The boss really wants you. I’ll play you and make you what you want to be’. That really helped as there were times when I thought: ‘Have I made the right decision?’.” Mikel added.
sports world