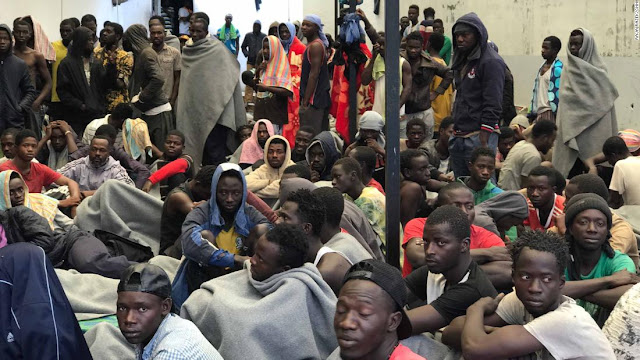 On the video, released by CNN this week, young men are seen being auctioned off as farm workers.
The AU chairman, President Alpha Conde of Guinea, demanded prosecutions over a "despicable" trade "from another era".

Migrants trying to reach Europe have spoken of being held by smugglers and forced to work for little or no money.

The footage released by CNN appears to show youths from Niger and other sub-Saharan countries being sold to buyers for about $400 (£300) at undisclosed locations in Libya.

"These modern slavery practices must end and the African Union will use all the tools at its disposal," Mr Conde said.

Libya has opened an investigation into the practice, CNN reported on Friday.

Many thousands of migrants each year try to reach Europe by crossing the Mediterranean
In April, the International Organization for Migration (IOM) said it had gathered evidence of slavery in Libya.

African migrants 'sold in slave markets'
The IOM's chief of mission for Libya, Othman Belbeisi, told the BBC at the time that migrants were priced according to their abilities.

"Apparently they don't have money and their families cannot pay the ransom, so they are being sold to get at least a minimum benefit from that," he said.

"The price is definitely different depending on your qualifications, for example if you can do painting or tiles or some specialised work then the price gets higher."
africa strange and bizzare