Posted by Unknown November 14, 2017
For the first time since 1958, Italy won't be participating in a World Cup. Italy played to a 0-0 draw with Sweden in a World Cup qualifying play-off second leg on Monday, falling 1-0 on aggregate to miss out on Russia 2018. 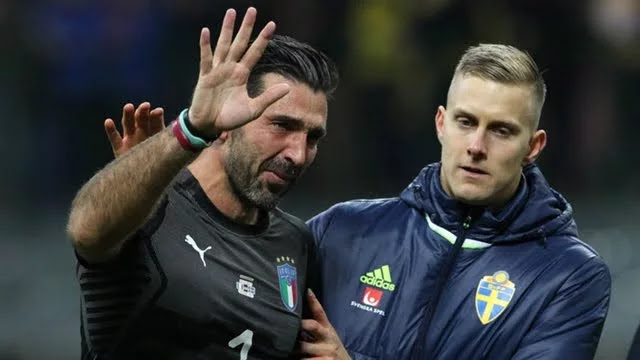 The defeat brought the curtain down on the mammoth international career of 39-year-old goalkeeper Gianluigi Buffon, who was inconsolable after making his 175th appearance for his country on the night.

The legendary goalkeeper confirmed post-game that the second-leg disappointment against Sweden was his final match for the Azzurri.
'' It’s disappointing, Not for me, but for the football movement, because we failed at something that could've been truly important for the country. That is the only regret I have and certainly not that I am finishing my career, because time passes and it's only right. It's just a shame my last official game coincided with the failure to qualify for the World Cup''- Buffon told Rai Sport while fighting back tears.
sports world