Posted by Unknown November 21, 2017
The Lagos State Police Command yesterday paraded former Minister of Finance, Kalu Idika Kalu’s alongside three others for drugging and robbing his boss in his Victoria Island home of cash and valuables estimated at over N10 million in September. 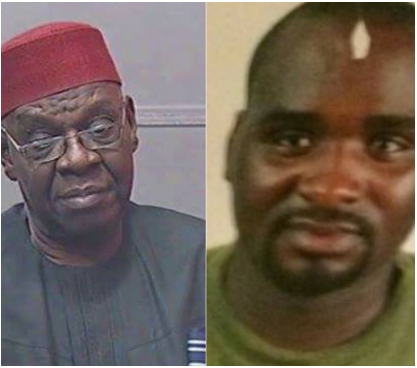 Peter Uboh Obi(the chef) who spoke to newsmen said he was paid N100,000 for his role in the operation carried out with Samuel Ogana, Joy Omagu and Sunday Emmanuel, adding that he was compelled to drug his boss because he was owing him N60,000.

“I started working for Dr Kalu about 10 months ago as chef. I knew Samuel Ogana who introduced me to the gang in Ogoja, Cross River State. We have been friends for a long time before I came to Lagos. One day, he told me that I can make a lot of money from my boss if only I would agree to do what I was told to do. He promised to introduce me to his friends. He invited me out one day where he introduced me to the gang. We met at a bar on the Island. They were three. They told me that they would give me Valium 5 and that all I needed to do was to mix it in his coffee.” he said
“I stayed away in my room when the gang arrived. They searched the entire rooms and went away with a lot of valuables. They later came back and handed a cash of N100,000 to me.”
Kalu Idika Kalu


Joy Omagu, a female member of the gang confessed she was recruited as a househelp by the gang and posted to the home of Lagos socialite, Augustina Seriki,  at Lekki,. She also admitted to adding a sedative in a cup of coffee which she gave to her boss.

“I was recruited into the organisation by my brother, Sunday Emmanuel. Before I was posted to the home of my boss, the gang lectured me on what to do. They told me to first of all gain the trust of the woman I am going to work with. They told me that the woman is wicked and had treated her former househelp badly and that it was going to be payback time. When I arrived the house at Lekki Phase 2, I was told that they were going to pay me N40,000 as salary. I was satisfied with the amount, but having been recruited by the gang I had no choice but to do their bidding. A month after I was recruited, I set in motion how to carry out the task. On that fateful day, Sunday sent me a sachet of Valium 5 and instructed me to grind and mix it in my madam’s coffee, which I did. We also sprayed some substance on her bed that will enable her sleep very well. However, luck ran against us when she felt uncomfortable and asked me to remove the bed spread. I was at my duty post when the police came to arrest me. I never knew that she had informed the police.”
Speaking to newsmen on the arrest of the suspects, Lagos State’s acting Commissioner of Police, Edgal Imohimi, said the police team recovered drugs like Diazepam, Injectable (IPS), Nitrogen (morgodon) tablet grinded into powder and one syringe from the suspects.

“The suspects, who operate as a syndicate, robbed the doctor and stole the sum of N750,000, a Blackberry phone, a Samsung phone and other valuables valued at N10.9m.”
Edgal further disclosed that the suspects would soon be charged to court.
news