Posted by Unknown November 15, 2017
Britain's most violent prisoner, Charles Bronson on Tuesday, officially tied the knot with 37-year-old actress Paula Williamson at HM Prison Wakefield where he is currently imprisoned. 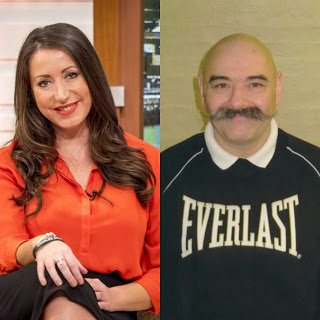 The couple planned to tie the knot on Paula’s birthday in August – but had to wait for confirmation of a date for their ceremony from the authorities.

Speaking on Good Morning Britain, Paula revealed that they would be married “sooner rather than later” in the prison chapel, where they would be allowed 10 guests who would be a mixture of her friends and family and his.

The couple were granted permission to wed in a service that took place November 14 . Former Corrie actress Paula Williamson was bundled into Wakefield jail under a purple cloak after a bizarre procession through the town led by a Bronson lookalike and a woman on a mobility scooter. Britain’s most violent prisoner, 64, — who has spent the past 41 years in prison — was handcuffed to a warder for the strictly controlled two-hour ceremony witnessed by just five guests.

The pair held their wedding inside HMP Wakefield.A reception was held at a local hotel, but Paula will be heading to Malta without her new husband as he was led back to his cell after the ceremony. Paula emerged from the prison under a ghostly white shroud on top of her purple cloak, ensuring her dress was almost completely hidden from view.

She was then smuggled into the York House Hotel through a side door to continue the celebrations with friends and family – who had their phones confiscated as she has reportedly sold picture rights to a newspaper. 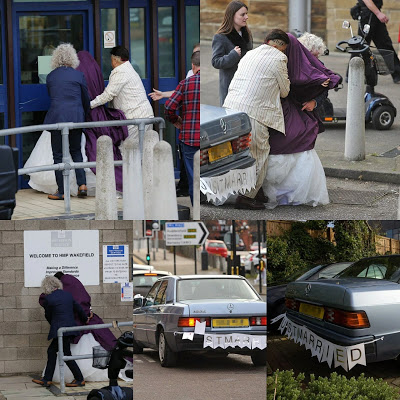