Posted by Unknown November 21, 2017
Zimbabwe's president, Robert Mugabe, has finally resigned after 37 years as Zimbabwe's leader. The announcement came after the country's parliament began an impeachment process against the dictator today. 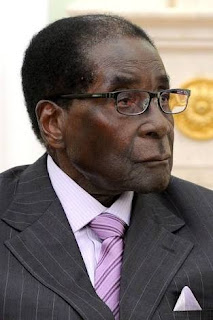 There were jubilant scenes in capital Harare after Mugabe's decision to stand down was announced, and MPs were seen dancing for joy in parliament.

An impeachment debate was suspended by the Speaker of the Zimbabwean parliament, Jacob Mudenda, who announced the president had quit.

The 93-year-old initially held on to power in the face of an army takeover that shattered his authority and expulsion from his own ruling ZANU-PF party.

Thousands of people joined mass protests against him and calls to resign came from many sides, including from the ruling party's favourite to succeed him, Emmerson Mnangagwa.

Mugabe's letter made no mention of who he was leaving in charge, but Mr Mudenda said he was working on legal issues to make sure a new leader was in place by the end of tomorrow.

In his official resignation statement, Mugabe said: "I Robert Gabriel Mugabe hereby formally tender my resignation as President of Zimbabwe with immediate effect."

He said he had stood down to allow a "smooth transfer of power", and said the resignation was "voluntary on my part".

British Prime Minister Theresa May voiced her hope that Mugabe's departure would bring in a new era.

In a statement she said: “The resignation of Robert Mugabe provides Zimbabwe with an opportunity to forge a new path free of the oppression that characterised his rule.

"In recent days we have seen the desire of the Zimbabwean people for free and fair elections and the opportunity to rebuild the country’s economy under a legitimate government.

"As Zimbabwe’s oldest friend we will do all we can to support this, working with our international and regional partners to help the country achieve the brighter future it so deserves."

Thousands of people had gathered outside parliament urging Mugabe to resign. Since the crisis began, Mugabe has been mainly confined to his lavish "Blue Roof" residence in the capital.

Mugabe led Zimbabwe's liberation war and is hailed as one of post-colonial Africa's founding fathers and a staunch supporter of the drive to free neighbouring South Africa from apartheid in 1994.

The country faces a foreign exchange payments crisis and roaring inflation.But many say he has damaged Zimbabwe's economy, democracy and judiciary by staying in power for too long and has used violence to crush perceived political opponents.

South African President Jacob Zuma and his Angolan counterpart, Joao Lourenco, were due to travel on Wednesday to Zimbabwe in a fresh sign of diplomatic pressure, South Africa's state broadcaster said.

Mugabe held his weekly cabinet meeting on Tuesday but only five ministers and the attorney general turned up, while 17 others opted to attend a meeting to plan the impeachment.

"The people of Zimbabwe have spoken with one voice and it is my appeal to President Mugabe that he should take heed of this clarion call ... to resign so that the country can move forward and preserve his legacy," Mnangagwa said in a statement.

The origin of Mugabe's sudden downfall lies in rivalry between members of Zimbabwe's ruling elite over who will succeed him, rather than popular protests against his rule.

The army seized power because Mugabe sacked Mnangagwa as vice president this month to smooth a path to the presidency for his wife Grace, who is unpopular with many Zimbabweans because of her perceived lavish lifestyle.

Reuters reported in September that Mnangagwa was plotting to succeed Mugabe with army backing at the helm of a broad coalition.

The plot posited an interim unity government with international blessing to allow for Zimbabwe's re-engagement with the world. Its main aim was to stabilise its economy.

The former vice president was a key lieutenant to Mugabe for decades and stands accused of participating in repression against Zimbabweans who challenged the leader.

Mnangagwa said he has fled Zimbabwe because of a threat to his life after being purged from the ruling party.

He said he had been in contact with Mugabe and invited to return but would not do so until his security could be guaranteed.

Mnangagwa said his desire was to join all Zimbabweans in a "new era" that would rebuild the economy for the benefit of all.

He said Mugabe and Mnangagwa had been in contact since Mugabe's speech on Sunday in which he defied calls to step down.

In the draft impeachment motion, ZANU-PF said Mugabe is a "source of instability", flouting the rule of law and presiding over an "unprecedented economic tailspin" in the last 15 years.

It also said Mugabe had abused his constitutional mandate to favour his wife Grace. On Saturday, hundreds of thousands took to the streets of Harare to celebrate the ruler's impending fall.
africa news