Posted by Unknown November 01, 2017
A move by some governors on the platform of the All Progressives Congress to use the platform of the National Executive Council of the party to endorse President Muhammadu Buhari for a second term failed on Tuesday. 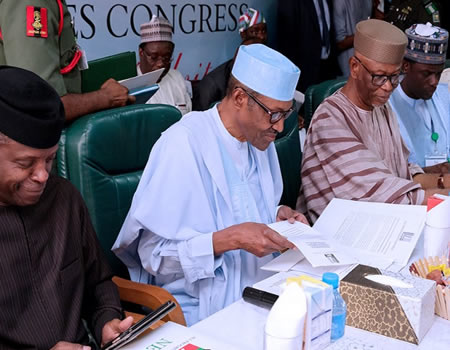 The APC NEC is the second highest decision-making body of the party after the national convention.

In separate interviews with reporters at the APC National Secretariat, the venue of Tuesday’s NEC meeting, the Chairman of the Progressives Governors’ Forum, Owelle Rochas Okorocha; his  Plateau and Kebbi counterparts, Simon Lalong and Atiku Bagudu, respectively said only Buhari had what it would take to fly the party’s flag in 2019.

The governors spoke before the commencement of the NEC meeting. Lalong said all the governors had agreed to work towards the President’s re-election in 2019.

He said,
“Concerning the issue of sole ticket for Mr. President, I want to say that if Mr. President is performing, well-respected and carrying everybody along, all of us have resolved that we will work for him.”
“Do we have any other person that will challenge the President again? Whatever you call it, as far as we are concerned, we have one President and that is the ticket we will fly.
“I want to assure you that you won’t see a wrangling party after the meeting. From now onwards, it will be focused governance from Mr. President and all the governors from the states. We have all resolved to support Mr. President.”

His Kebbi State counterpart, Atiku Bagudu, who was also responding to a question on whether the governors had resolved to give the President an automatic ticket, said,
“The performance of the President in the last two and half years suggests that if he wants to contest, l will certainly support him and l know that our party members feel the same about him.”
However, the governor of Nasarawa State, Tanko Al-Makura, expressed a slightly different opinion.

While responding to a similar question, he said,
“For anybody to preempt the consensus opinion of the people is to say the least not fair to the vision of our party.
“I can tell you if there is anything that is clandestine, the President will not honour it. So, let’s wait and see as we embark on these meetings.
“I believe the consensus and the preponderance of opinion of all party members will be what is good for this country and we have already known the will of this country, the future of this country as we are now as a country is associated with one person, who is impeccable, who has the greatest amount of integrity that you can find in any human being around; so, your guess is as good as mine.”
Also speaking on the issue, Okorocha, who is also Imo State governor, said only a decision by President Buhari to contest the 2019 election could make him drop his personal presidential ambition.

“If Mr. President wants to run for election, he will follow all the processes and if he is the person, we will all support him. In APC, there is no imposition of candidate.
“If Buhari is running, I will allow that man to continue but if he is not running, I won’t sacrifice my Presidential ambition. Mr. President is showing the right leadership and taking the very right steps and there is reconciliation going on even with nobody talking about it. There is the spirit of reconciliation and people understand their role.
“Our role is to make this party great and we are all trying to do that; but importantly, the governors have remained the pivot upon which this wheel of change has rotated so far. We have kept this party working and after this meeting, our congresses and convention will commence in the early part of next year and all party organs will be strengthened. We are in good mood and high spirits.”
During the meeting proper, one of the party members moved a motion asking that a vote of confidence be passed in the President and that he should be endorsed as the party’s candidate for the forthcoming presidential election.

This however failed to sail through. The party members felt that considering the fact that aggrieved members had yet to be pacified, doing so would escalate tension in the party and adversely affect its chances.

The Speaker of the House of Representatives, Yakubu Dogara, confirmed this while speaking to newsmen after the NEC meeting.