Posted by Unknown October 11, 2017
Dino Melaye, a senator representing Kogi west, received the award in spite of the disapproval of the Nigeria Union of Journalists (NUJ). 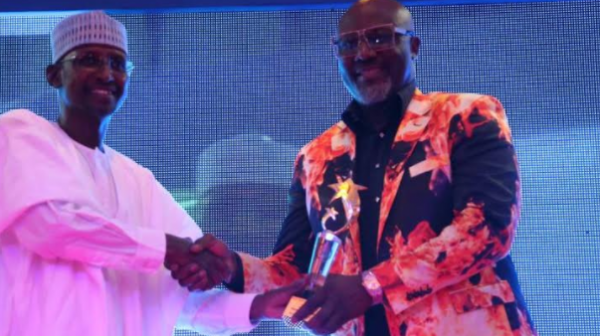 The award presentation was held at Sheraton Hotel, Abuja.

Prior to the ceremony, NUJ had described the award as illegal, saying it was not recognised by its constitution.

Abdulwaheed Odusile, national president of NUJ, and Ella Abech, chairman of FCT council of the union, had released separate statements saying the union had cancelled the award ceremony.

Odusile said, “the union dissociates itself from the so-called conferment as it did not comply with the provision of the constitution of NUJ on such issues, hence the nullification of the award” while Abechi said, “the press corps is not a legitimate organ to decide who to give awards to”.

The ceremony however proceeded as scheduled.

Melaye’s ‘senator of the year’ award was presented to him by Muhammad Bello FCT minister.
nigeria politics